Around the country, groups are teaching wounded troops and veterans to fly fish. While there's not much research on the therapeutic benefits, some say the experience helps them heal.

One sunny day in 2017, Luke Cureton was on a lake in Montana.

He’d been medically retired from the Army. A roadside bomb injured him during his second tour in Iraq, he said. He’d been struggling with PTSD, which is part of the reason he was in Montana fly fishing. He cast an imitation fly and tried to make it look appetizing. Then he got a bite.

Cureton was there at the invitation of Warriors and Quiet Waters. The Bozeman-based nonprofit group brings post 9/11 combat veterans out to Montana, where they get an immersive fly-fishing experience in the company of family and fellow vets.

It’s one of many organizations that bring military community members together for recreational therapy. Some participants say the experience changed their life.

Programs grow, though data is sparse

It’s important to know that fly fishing is hard. When he volunteered with Warriors and Quiet Waters, Army veteran Larry Weidinger remembers watching how easy the guides made it look. Then he tried it for himself.

But fly fishing can also be calming, grounding, and even profound.

“Every time the line hits the water, it's like a perpetual feeling of hope," said Army veteran Sean Gifford. “You get to learn the entomology, and you see how everything is connected in an ecosystem. And you're just one part of it.”

Another organization, Project Healing Waters Fly Fishing, reported thousands of participants in 2020. It partners with the Department of Veterans Affairs and with military healthcare facilities, as well as with volunteers all over the country. The group said its programs attract more participants each year.

But research on the therapeutic value of the programs is still pretty sparse. When Dr. Justin Baker was a Navy psychologist, patients would sometimes ask to be referred to a recreational therapy program. He’d say “Yeah, go for it. It's not going to hurt.”

Today, Baker is a clinical psychologist at the Suicide and Trauma Reduction Initiative for Veterans at Ohio State University. In part, he studies how to treat Post Traumatic Stress Disorder.

In sessions with patients, he targets “stuck points," beliefs about a traumatic event that make it hard to grieve or move on with life.

Some patients, he said, are stuck on a belief that, “Had I done something different, my buddy wouldn't have died.” He works with them to “build a case” against that story, until it turns into something more like: “I did everything I could do, and my buddy still died.”

“The evidence doesn't seem to stack up that these alternative treatments are better than the gold standard,” he said. “We still haven't surpassed that.”

But, he added, that “doesn't mean that the alternative treatments aren't helpful.”

Baker said mindfulness — the kind you might get from fly fishing — can be important to the healing process. And he said for those less inclined toward traditional clinical treatment, alternative treatment is a great place to start.

“There’s enough trauma to go around that all of us need to be helping, right? We’re all playing our role,” Baker said.

One day on the Warriors and Quiet Waters ranch outside of Bozeman, people were casting fly lines into a pond. Many were veterans. It was a smoky day — a result of Western wildfires.

Then someone called out, “OK, that's a cut!”

It was a movie shoot for an indie film called “Mending the Line,” about a young Marine who gets injured in Afghanistan, loses two men, and is wracked with guilt. At a Montana VA facility, he meets an older Vietnam veteran, and the two connect through fly fishing.

Warriors and Quiet Waters loaned its ranch for the shoot. Luke Cureton — the Iraq veteran — was on set. He said he hates the main character, Colter, who reminds him of himself.

He said Colter “carries on a lot of guilt from his prior experience in combat. And he's carrying that over into the real world. And he feels as if he doesn't deserve to be living at this point in time. … That's a struggle that I feel.”

In the film, Colter, the character, ends up working at Warriors and Quiet Waters. That's also like Cureton, who now volunteers, accompanying fellow vets fly-fishing. He said watching other people go through the program helped him heal too. 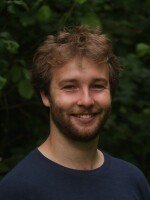