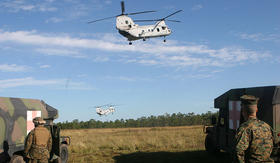 Veterans stationed at Camp Lejeune who were exposed to contaminated drinking water now have a chance to receive additional compensation.

The Obama administration will provide more than $2 billion in disability benefits to veterans assigned to Lejeune when the camp's water was tainted between August 1953 and December 1987.

The Department of Veterans Affairs estimates that up to 900,000 service members might have been exposed to the contaminated water.

When it comes to the U.S. military's special operations forces, names like Navy SEALs and Army Green Berets probably come to mind. But the Marines have a unit that's not very well-known: the Raiders.

So-called "burn pits" were common at U.S. military outposts in Iraq and Afghanistan. Legislation in the Senate would create a center to study the effects of breathing their smoke.

Lack of Confidentiality May Keep Soldiers From Seeking Help for Alcoholism